What Does A LIMS And The Empire State Building Have In Common?

Lesson 1: Don’t create an over-sized beast you want to get rid of.

What does the Empire State Building and a Laboratory Information Management System (LIMS) have in common? They are often associated with over-sized beasts! Like King Kong trying to escape the Boeing P12 airplanes, LIMS deployments are often frustrating as they become over-sized because of their complexity. The complexity starts with the LIMS product. Has it been designed to simplify complexity? Feedback from users of complex LIMS often includes errors crept in and users were not using the product properly because it was simply too much! Their LIMS software did too many things – it had too many options. The number of options stressed the users out and they simply chose to stop using the system correctly. LIMS users wanted, "Fewer buttons on the screen, not more, and to make it intuitive and fun to use," was the general feedback.

When recently visiting the Empire State Building I was pleasantly surprised to see the Project Schedule for deployment - a Gannt Chart on one page. According to the history books, the project took 410 days to complete with 3,400 concurrent workers at its peak. The project was delivered on time and within budget. After over 85 years, it is still fully operational. 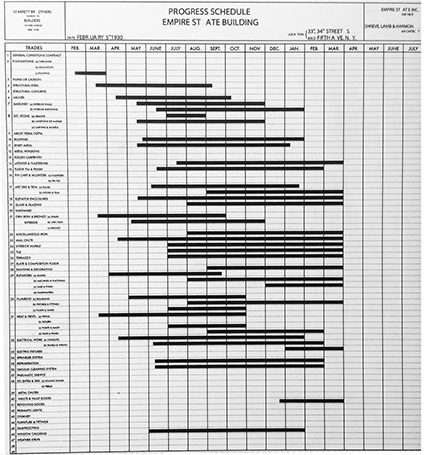 Software systems work best if they are kept simple rather than made complicated; therefore simplicity should be a key goal in the design and deployment of software, and unnecessary complexity should be avoided.

Too often, people over­complicate things in business because it’s too much effort and hard work to keep it simple.

We’ve created a simple checklist to help summarise the deliverables required for LIMS deployment within a GxP environment. Your chosen deliverables easily fit on a one page Gannt Chart regardless of size of the deployment project!

Dr. Paul Moran is the founder of Broughton Laboratories Ltd and Broughton Software Ltd who serves as their Chief Executive. As a chemistry graduate with a PhD in Biotechnology, Paul began his career at the US pharmaceutical manufacturer Johnson and Johnson. In his role as QC Laboratories Manager, Paul obtained Six Sigma Black Belt certification. Paul entered the world of contract QC testing in 2003 supporting the successful growth of a contract laboratory leading to its merger in 2005. Paul started his first venture in 2006, establishing Broughton Laboratories as one of the leading UK MHRA and US FDA GMP licensed contract laboratories with its own dedicated stability storage facility which opened in 2011. The spin-off company, Broughton Software, was established in 2012 to provide a LIMS solution for regulated QC Laboratories. LabHQ LIMS launched its 4th release in September 2015.

A clear and bold header

The headline and subheader tells us what you're offering, and the form header closes the deal. Over here you can explain why your offer is so great it's worth filling out a form for.